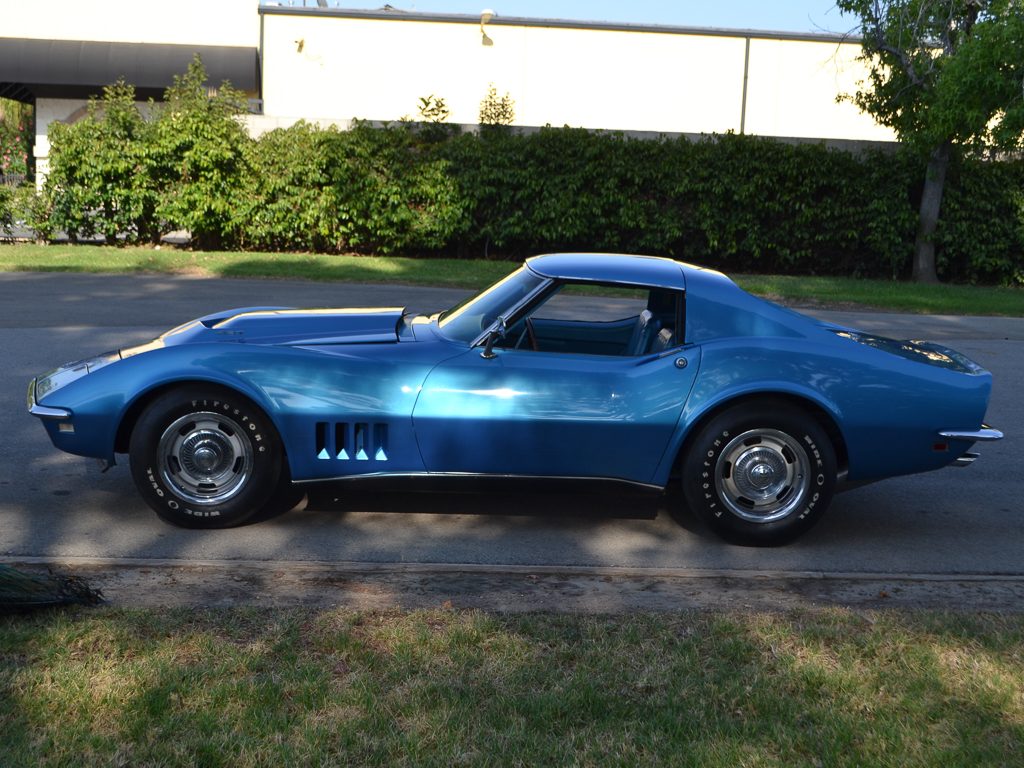 By the mid-sixties, “The Big Three” were in a race to see who could come up with a bigger, more powerful engine to put in a lighter, thus faster car. Zora Arkus-Duntov and his engineering team were constantly and tirelessly developing Corvette to be a better car both on and off the track. But despite their efforts, the car was seriously challenged by Carroll Shelby’s Ford-powered Cobra. Arkus-Duntov’s answer was the Grand Sport Racing program. However, GM’s self-imposed racing ban made the development of the Grand Sport difficult at best and just as things were starting to get interesting, the program was discontinued at the behest of the top GM brass and the cars ordered destroyed. But, not before 5 examples were built and somehow “disappeared” out the back door and into the hands of privateers. However, Zora would not let a “minor inconvenience” deter him from making Corvette into the performance car he always knew it could be! All during ’66, his team began development on what would be Chevy’s massive counter attack to Shelby’s “Giant Killer” 427 Cobra. And what came to be known as RPO L88 was born. Providing enough firepower to allow Corvette to compete and win anywhere, the purpose-built L88 427 was built to take all the punishment racing could inflict on it! It featured forged internals, 12.5:1 compression, an extreme mechanical camshaft, heavy-duty valvetrain, a massive 850 CFM Holley carb that gulped massive amounts of fresh air from through an aggressive cold-air, Cowl Induction hood. The engine red-lined at 6500 RPM, but in reality was built to handle more and in race trim, approached 600 horsepower!! But, that’s not all you got with the L88 package! A choice of a Muncie M22 close ratio, “Rock Crusher” 4-spd. Or a heavy-duty Turbo 400 3-spd automatic transmission was offered along with a wide range of rear axle ratios all the way up to 4:56! “Mandatory Options” included j-56 heavy-duty disc brake calipers, J-50 power brakes, f-41 high-performance suspension, K66 transistorized ignition and G-80 Positraction completed the package. Oh, and there were a few things that you couldn’t get, like a fan shroud, air-conditioning or a radio. Not like you’d be able to hear it anyway. And for the inaugural ’67 production run, you couldn’t get a heater either (later to be added back in the the ’68 and ’69 runs). Chevy dealers tried to keep these beasts low profile by actively discouraging orders from anyone other than professional racers with relationships with Chevrolet and designated the cars “For off-road use only”. They even went as far as laughably rating the engine at 430hp (5 less than the L71) to dissuade the average buyer from ordering one over an L71. But for those lucky enough to know what they were, purchasing one gave you a Corvette that was virtually track-ready and capable of over 150mph almost right out of the box! Only 216 L88’s were built in total from ’67-’69 and they are a highly sought-after and coveted piece of Corvette and GM history!

Our story of this very original and correct L88 begins with the 2nd owner who bought it in ’71 off a used car lot in downtown Los Angeles with 7,500 miles on the odometer. He ended up removing the original engine and replaced it with a mechanical fuel injected small block to deal with the gas crunch of ’74. And drove it daily.
He then ended up selling the original motor (ugh!) for $500.00. The car was later put into storage with the intention of someday restoring it. But as with many great intentions, he never quite got around to it.
Fast forward to 2013. During the Petersen Automotive Museum’s 60th Anniversary Corvette Show, Mike happened to met the owner. From there, it was months of calling him before an actual viewing could take place. Like any potential acquisition of an ultra-rare production L88, the thought of buying one starts the adrenaline pumping!

The viewing was as expected. In fact, better than expected. The tank sticker verified the RPO L88 option and all the mandatory options that go hand in hand.
Unfortunately, the owner was undecided about actually selling it. The conversation eventually went in the direction of restoring it for him. Of course that was fine but my preference was to own it.

Fast forward to months later another meeting with cash in hand ended up with the official transfer of ownership.

That was an exciting day!!

So here we bring to market this exceptional example of a real no excuse L88 with an original interior. Having been painted previously this car could potentially qualify for a 3 star Bowtie!!!

Additional photos and details at:  http://corvettemike.com/used-corvettes-for-sale/1968-Corvette-L88-Coupe-2498