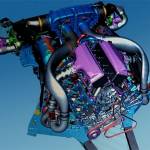 Corvette Forum has scored three coups in the past month concerning Chevrolet’s next-generation sports car. The latest leak is a CAD drawing of a longitudinal, DOHC, twin-turbo V8 that could be one of the three rumored powerplants sliding into the mid-engine ‘Vette’s engine bay. In an earlier leak, a detail showing the V8’s turbocharger came labeled as “Gen6 LT7,” leading sleuths to believe this is the sixth-generation of GM’s small-block V8 architecture, dubbed LT7.

As gearhead tweeter Bozi Tatarevic pointed out, the illustrated V8 drawing shares cues with the 3.0-liter, TT V6 LGW engine used in the Cadillac CT6, such as turbocharger placement and belt configuration. The turbos hang on the sides of the engine instead of lying in the V between the cylinder banks, with plumbing running from the turbos up to water-to-air intercoolers atop the banks. That feature is, again, the same as on the Cadillac TT V6. Also of note, it appears