Bound for Autorama, ’Vette instead meets its doom 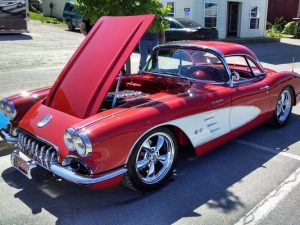 The next morning, everything was gone.

The Corvette, once bound for the Autorama showroom floor, turned up in pieces a few days later in Detroit. “They basically took that and stripped all the parts out of it, and cut it into three pieces and burned it in three different piles,” Fischbach said.

“Every piece on that car is worth a lot of money.”

Southgate police confirmed Tuesday that the department was investigating the incident. Calls were referred to Detective Sgt. Ronald Pongracz, who was unavailable for comment.

A Holiday Inn manager said hotel surveillance video footage showed the 70-foot truck and trailer leaving the parking lot at 3:30 a.m. The manager, who declined to give his name, said that because of the truck’s position in the parking lot, the hotel’s cameras would not have captured someone entering the vehicle.

The hotel security guard, Fischbach said, didn’t see anything, “which I’m still in awe of.”

“I don’t think it would have been very quick,” he said. “This is a 70-foot truck and trailer, so to get it out of a hotel parking lot wasn’t very easy.” 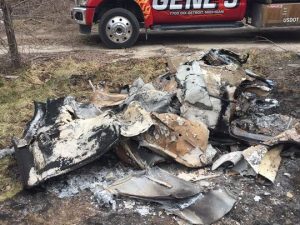 “They basically took that and stripped all the parts out of it, and cut it into three pieces and burned it in three different piles,” Fischbach said. (Photo: Gene’s Towing)

Fischbach’s car passion was sparked decades ago from necessity. “I started working on my own cars because I couldn’t afford to pay anybody to do it,” he said. “It mushroomed into a hobby and a business.”

Now the owner of Dave’s Collision and Car Repair in Bellaire, Fischbach, 58, has been showing classic cars for about 45 years.

His souped-up Corvette was a champion of the annual National Corvette Show in Bowling Green, Kentucky, according to event organizers. It most recently won best in show in 2016.

“I think it was just all the craftsmanship and attention to detail, and the stuff that we had done to it, mechanically,” Fischbach said. “It was a pretty high-tech car. It was a 1960 Corvette that drove like a 2013 Corvette.”

Before the three burned pieces of the Corvette were recovered, police located his missing Jeep and trailer.

“The Jeep was like brand new. The only thing they did was steal the radio out of it. They stole the radio out of it and messed up the dashboard a little bit,” Fischbach said. “They didn’t burn the trailer, but they tore it all up and ransacked it. It’s really not repairable.”

Also taken were supplies inside the trailer, which Fischbach used to fix up cars while on the road.

“You name it and it was in that trailer,” he said. “Of course, they took all that.”

Fischbach was hesitant Tuesday to put a dollar amount on his loss, but estimated the collection was worth somewhere between $250,000 and $300,000.

Almost two weeks after the thefts, Fischbach occasionally surfs the internet hoping to strike gold and locate parts from his Corvette for sale.