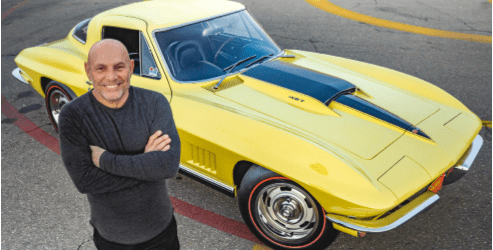 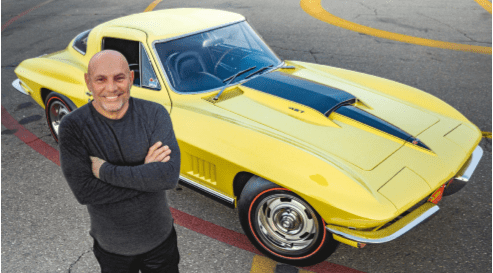 Michael ‘Corvette Mike’ Vietro had seen Chevy Corvette cars all his life as a kid while pumping gas on Revere Beach Parkway, or sitting on the wall by the Shute Library as the show-cars drove down Broadway, likely headed to Revere Beach.

But it wasn’t until 1978 in California that the Everett native got behind the wheel of his own Corvette, pushed on the gas, and changed his life forever.

“I got my first Corvette, it was mocha colored, and I was driving that brand new Corvette and all the sudden my life changed,” he said. “I was shaking. I was obsessed. From that one car in that moment, I built Corvette Mike. That car was life-changing. I had to do something that day. I wasn’t a mechanic, so I couldn’t work on the cars. But I could be a showman for them, and I had just gotten into the car sales business so I kind of knew a little about that.”

Vietro is now entering into his 39th year of business in Orange County, California, operating the successful Corvette Mike’s dealerships. He has several dealerships across the country, including one in Carver, Mass., and has become the world’s leading authority of vintage and classic Corvettes. He has been operating in Anaheim the last 15 years, and is in his third location in Orange County over the 38 years.

“You have to have that love affair with the car – that passion – to wake up every morning and be obsessed with it,” he said. “It consumes about every waking minute of my days – the buying, selling, talking and texting with people all over the world about Corvettes.

“We have a great following and a great reputation and I worked hard at it,” he continued. “You have to work harder at it now than I did in the beginning because there were no Yelp reviews online. Now, you have to work harder to keep every single person happy. It’s not easy, but it’s how I built my business.”

These days, his favorite Corvettes are a 1963 black split rear-window with a 340 horsepower engine he bought from the original owner in Orange County.

He said he’s also pretty excited about the 1967 yellow L88 with the original motor. It is one of only a few ever built, and the only one in the world that retains its original motor.

Such luxuries, however, are a far cry from the live Vietro led in Everett – where he grew up poor, working hard for his money and only fantasizing about such cool cars.

“We grew up pretty poor in Everett,” he said. “Early on, my dad had a donut shop in Everett Square that my grandfather had before him. He developed an allergy to the flour and had to sell it. Then he worked three jobs to raise five kids and was never the same.

“Early on, if I wanted money, I had to go out and earn it,” he continued.

That included working construction, cleaning and stripping floors at the Armory in Watertown, washing dishes in restaurants, and even pumping gas for his father at the Mobile Station on the Parkway.

“My dad worked at the gas station there and it was so busy all the time,” he said. “He made $2 an  hour and would give me 50 cents to help him out. That’s really where I began to see Corvettes and wanted one for myself.”

He said he also fell in love with them while hanging around Broadway in his neighborhood by the Shute Library.

“In the summer, the Corvettes would go up Broadway coming out of Revere or going to Chelsea,” he said. “I remember being amazed by them at the age of 12 and thinking they were the coolest thing I had ever seen.”

He said his life took a tremendous change in direction when, after graduating Everett High in 1973 and breaking up with his girlfriend, he got upset and joined the Marines. After being rejected for a childhood injury to his eye, he said he would not take ‘no’ for an answer – a trend in his life. With an appeal, he was able to enter the Marines, and had done well enough on his tests that they allowed him to go to basic training in San Diego.

“They owned you, and it was brutal, but it was the best thing that ever happened to me,” he said.

He eventually trained to be an aerographic mate, which he said was basically a Marine weatherman. After traveling the world, becoming a great fit in the Marines, he finally left the service in 1978 and retired to California to finish his degree.

During that time, he accompanied a friend to a Toyota dealership to buy a new car, and while there, ended up getting a job at the dealership. That job led him to go for it all and try to buy his first Corvette – a life-long dream. After a few roadblocks that he refused to let stop him, Vietro finally got that mocha-colored 1978 Corvette – which changed his life.

Soon after, he decided to start a car show in California to celebrate the 25th anniversary of the Corvette. He invited every car club west of the Mississippi and spoke to enthusiasts – who were often confused about his thick Everett accent. That show led to more shows, and then he got involved in brokering the cars – which eventually spawned Corvette Mike.

“It was total passion for the car,” he said. “I was obsessed like nobody’s business. I started buy, selling and doing Corvette auctions. I don’t know anyone else that did what I did in this industry. That was 1978. I didn’t know it, but I was a pioneer.”

Now, this week, Vietro plans to return to Everett to visit his hometown and the new Encore Boston Harbor casino – something he felt compelled to do while at a Corvette show at the Encore in Las Vegas.

“I just still can’t believe we have an Encore casino in Everett,” he said. “I was just at a big car show at the Encore in Las Vegas, and I kept thinking the next time I was in Everett, I had to stay at the Encore. I can’t wait to see my hometown again and visit with family and friends. I’m also thrilled about the Encore Casino and look forward to checking out all that it has to offer.”