What do you think about this?? 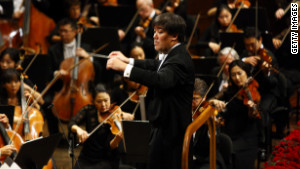 Add a new one to the irate reactions triggered by incessant ringing of a cell phone: bringing one of the world’s great symphony orchestras to a dead stop in mid-performance.

In a disastrous meeting of an old classic and new technology Tuesday night, the New York Philharmonic was performing Gustav Mahler’s Ninth Symphony — a haunting piece some say the composer wrote as he faced his own death — when a cell phone started ringing in the audience.

Classical music fans were quick to light up Twitter and blogs later with details of what happened in the storied performance hall.

“After the last climax, the movement begins to wind down, toward that sublime last page of the score where music and silence are almost indistinguishable,” former classical singer Michael Jo wrote of one moment when the phone began to ring.

“In other words, just about the worst possible moment,” Jo wrote on his blog.

Jo was seated in a box seat on the right side of Lincoln Center’s Avery Fisher Hall and could hear the cell phone ringing in the front row on the left side of the stage. He described the phone going off throughout the whole performance but most noticeably at the beginning of the final movement, a particularly emotional part of the symphony.

Jo said Thursday that the most extraordinary thing was that the owner of the phone, an elderly man, did not even move.

Others bloggers said perhaps he could not hear the phone or was too embarrassed to claim the ringing intrusion as his responsibility. The phone rang for three to four minutes straight, leading Jo to believe that it was some kind of an alarm going off rather than a regular phone call.

Jo said New York Philharmonic conductor Alan Gilbert reacted to the intrusion by stopping the music. He didn’t melodramatically fling his arms down; rather, he merely dropped his hands, which alerted the musicians to stop playing, according to Jo.

Then, the only sound in the great room was the “Marimba” ringtone of the cell phone, Jo said.

Gilbert turned his attention to the owner of the phone, who was seated on the front row, and asked, “Are you finished?”

When there was no reply, Gilbert said, “Fine, we’ll wait,” and placed his baton on his music stand, according to Jo.

After a few more rings, the phone was silenced.

But that was not the end of the excitement, Jo said.