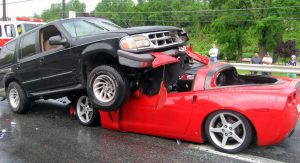 Seems like Corvettes are taking a beating out there!

Here’s the thing about traffic rules: they work as long as everyone abides by them. When they don’t, well… things can quickly take a turn for the worse, as this case goes to show.

A reader wrote in with a shocking story of driving his C6 Corvette fastback coupe the better part of a decade ago. He was in his late 20s and had just bought his dream car in DC when the power went out in much of the DC area where he lived.

There – at the intersection of the Indian Head Highway (MD 210) and Kirby Hill Road in Fort Washington, Maryland – the driver of the red Corvette was waiting his turn to make a left-hand turn off the six-lane highway. The Explorer failed to stop at the intersection, swerved to avoid one car, and ran right up onto the ‘Vette.

“I saw it coming,” says the Corvette driver, “and braced and closed my eyes, thinking this was it.” He opened his eyes to see the bottom of the Ford on fire, and unable to open the driver’s side door, climbed across to the passenger’s side, released the manual latch, and escaped in tact – with only a sore back for a few days following.

A police traffic investigator was on the scene. The fire department was called to put out the fire. And it took a couple of tow trucks to pull the cars apart – the driver of one having taken some of the photos below, saying he’d never seen anything like it.

The Corvette driver credits the car with saving his life. “As you can see at the junk yard the acrylic top was starting to melt but honestly stood up pretty well to all the weight and heat.” Thank goodness for that, because this incident could have ended a lot worse.